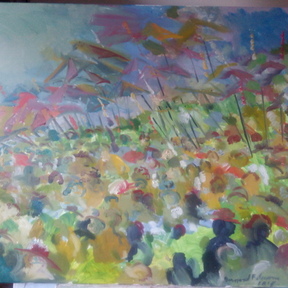 I paint regularly since the age of 8, animals, marines and imaginary characters.

Age, at which I got to know the horses of the Collège de Marcq, I had more friendly relations with them than with my teachers. ' one however, Mr. Dupont in 6th let me paint during recess or I did not ride on horseback. Strange thing, I found myself second in class that year.

I was very dyslexic, and I had lamentable spelling. Thanks to this day, I learned to draw, work with both hands.

In 1961 my parents, given my poor results resign themselves to putting me at the School St Luc Tournai in Belgium known worldwide for its artistic training in secondary school.

The following year I go back to photo Advertising with a team of teachers who were our allies and our advice, they led us according to our temperaments, remarkable people.

During all these years I continued to paint advised by my teachers who always encouraged me.

I opted for fashion in my photographic expression, I started as an intern at Jean Louis Guégan during the holidays (which was very beneficial for me, given that it fell on the collections. assistant trainee. Assistant, there I also serve different photographers of passages.

Eugène Vernier after a heavy session offers me to become his head of plateau in London, c e que fis and forced me to learn and speak English with speed and efficiency. Work with Vogue Anglais, Ford, Chesterfield.

Back in France, I set up my studio, rue Vercingétorix, surrounded by workshops of artists of all disciplines and beings more talented than the others.

1968 arrives and breaks my momentum, I do some reports of demonstrations without much interest.

I approached to become a photographer for Seventeen in New York, almost immediately I was turned away for my work permit..... I went to Montreal and almost immediately, I work for Canadian advertising, the Office du tourisme du Québec, Radio Québec, Radio Canada. My work is focused on the reporting of Fauna, Flora and Ethnology. Discovery of breathtaking landscapes, life in osmosis with fauna and flora ......

I was contacted by a businessman, former private secretary of Daniel Johnson Premier of Quebec to mount a multidisciplinary expedition on Indian migrations and especially there, on the Maya from Mexico to Panama, So from Tulum to Colombia, so Central America.

The various productions served the media, the specialized press, and various media that were centralized by the Montreal office, (St Lambert)

The embezzlement of the administrative director years later stopped us in Panama.

Re malversation the founding director abandons us ......... taking the funds, for me, it's the black hole, divorce, alcohol, etc...

I resume studies in the buildings, as a master checker in all bodies of states in the rehabilitation of the old habitat, helped by my friends of training I pass well the exam and an architect of the examination board offers me to go in the Gard, A st Jean de Valériscle lead a rehabilitation site of the medieval center of the village, which I did.

We settle there and end up with a very nice result.

New projects are looming, orders are pouring in and I am recruiting a rehabilitation team of 9 journeymen and 3 apprentices. The achievements follow one another becoming more and more important. (I make the plans, the metrés, sketches for the files of projections, I make reports on the places and situations of this very beautiful region.

I learned this region, I made it my own, as everywhere I went,

In 1981, the construction sites stopped, the projects melted and we had to start again at 0.

The Auroux law does not allow me to dismiss, I close, divorce and goes back to Belgium in the weekend house of my parents, there, I start painting almost days and nights, very quickly I find the whole band of artists of Koksijde (Coxyde) on the Belgian coast.

There, the working atmosphere is pleasant, everyone works product there is a serene atmosphere.

The exhibitions follow up to 7 per year the sales allow to live while remaining oneself and without concession. A working atmosphere, every year we make about thirty an exhibition in my very large garden, the atmosphere is laborious, good child, many visitors, decent sales.

In 1991 (Golf War) the art market collapses, the big galleries go bankrupt, the malaise is deep, given the slumps it is still necessary to reform, a friend, deputy director of a vocational high school in Grande Synthe offers me a replacement position in his establishment. On November 12, 1992, I entered this high school at the French national education.

I was passionate for 15 years to restore confidence to kids left behind, I did not stop suggesting to encourage, disembossed, teach them to Dare to project themselves and have ambition! It is astonishing that they were able to surprise us ... Many of them are with me on social networks and it warms my heart.

Since then, I have restored the house I live in, taking care of my family, and Now I have started to paint daily in oil or watercolor. 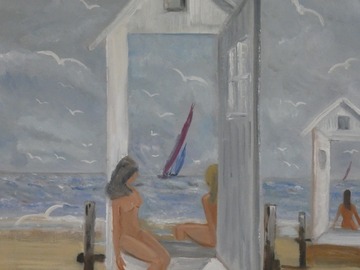 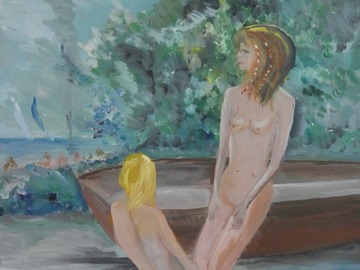 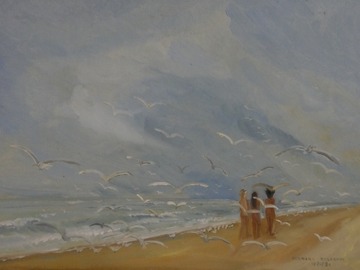 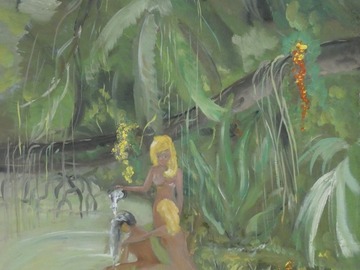